Thai Culture and Traditions – What You Need to Know to Succeed in Thailand?

Just focusing on word-for-word translation will not help your business make a splash in the Thai market. If you want to reach more Thai audiences, you need to take another step – adapting your Thai translation to fit the rich and diverse Thai culture and traditions. This step is to ensure that your translated content sounds authentic and attracts more attention from Thai audiences (or at the very least, it does not offend the culture and national pride of Thai people).

Here are some key aspects of Thai culture and traditions that you should keep in mind in order to gain success in this market.

Family is the most important thing in Thai culture

Another interesting thing about the Thai culture is that many Thais maintain strong ties to their home villages even if they move away for work. If parents work far away, it is not strange to see children being raised by grandparents or aunts and uncles. Younger family members are also expected to help with elderly care either in terms of finance or household responsibilities (or sometimes both).

Understanding this beautiful Thai culture, a lot of brands use family as their core concept for advertisement in this market and have gained quite a success. KFC is an example. To celebrate Mother’s Day, the fried chicken chain gathered a lot of mothers for individual interviews to discuss what they want to say to their children and then surprised them with warm embraces from their own children. This heartwarming advertisement was so successful that the famous restaurant chain Bar-B-Q Plaza did a similar follow-up Mother’s Day commercial which also received a lot of attention.

Thai people frequently communicate in an indirect manner, especially when discussing sensitive topics or serious problems. Thai people are likely to use the words “maybe” or “some people” to soften their statements. Mai bpen rai, which loosely translates as ‘no worries’ or ‘no problem,’ is a common Thai phrase you will hear all the time from the Thais.

Thais rarely exhibit strong negative emotions, with outbursts of rage, tantrums, and public crying being unusual. People in Thai culture believe that expressing negative emotions makes others uncomfortable, which is why it is synonymous with “losing one’s face.” Because it is an essential part of their belief, a Thai will always try to think of others before themselves.

This relates to a Thai culture‘s belief known as the “middle way” which has its roots in Buddhism. It refers to the belief that nothing should be “too negative” or “too positive” in its expression. Foreign companies sometimes interpret this to mean that Thais don’t get riled up, take offense, or take things too seriously. Make sure you don’t misunderstand Thai people as completely carefree people (because, on the inside, they often do care), and pay attention to your communication styles if you want to get closer to the Thai audience.

Thailand’s main religion is Theravada Buddhism. Thailand’s religion is distinct from that of other Buddhist countries, having been infused with many outside elements. Hindu practices and traditional Chinese beliefs have influenced local beliefs to some extent, with animist beliefs playing a significant role in shaping Thai Buddhism into what it is today. The second most common religion in Thailand is Islam, followed by Christianity, which is believed to account for less than 1% of the Thai population.

Thailand’s culture has a strong belief in ghosts and spirits. Customarily, Thai people consult a fortune teller or a monk for an auspicious date before planning a wedding, buying a home, or test-driving a car.

Conducting business in the Thai market, you should acknowledge and respect their beliefs to avoid any offense and misunderstandings.

The Land of Festivals and Celebrations

Thailand is famous for festivals and celebrations that strongly reflect Thai cultural and traditional values. Most Thai festivals are associated with Buddhist and Brahman beliefs, though many derive from local traditions and folklore. For centuries, many have taken place over the course of a year.

So what do these festivals have to do with your business? They actually do have a huge influence on your business marketing strategy in the Thai market. You can plan special marketing campaigns for these festivals and celebrations to boost your sales or simply have congratulatory posts on social media or send out emails to gain more engagement from your Thai audience.
The Thai Language

Language is an essential component of any culture. It is the means by which people interact with one another, form relationships, and foster a sense of community. That’s why you need to know the basics of the Thai language in order to plan for a successful Thai translation project.

Thailand has 71 living languages, with Thai being the official and most widely spoken. Thai is spoken by approximately 70 million people in Thailand and other countries such as Cambodia, Malaysia, Myanmar, and Laos.

There are numerous aspects of the Thai language that has a direct impact on your Thai translation projects. For example, there is no space between words in Thailand which requires special attention from professionals to avoid line-breaking mistakes. In addition, the Thai people use two separate calendars and number systems. For more details, check out our blog post below:

Are you planning on entering the Thai market? If you do, acknowledging the Thai culture and traditions is the first key step because these factors influence your consumer behavior in the Thai market. In addition, they will save you from embarrassment or misunderstanding due to the differences between your culture and Thailand’s.

Don’t know where to start? Talk to our Thai localization experts today for a free 1:1 consultancy.

GTE Localize is a professional Thai translation agency located in Vietnam, Singapore, and the United States. We have a deep network of native Thai translators who have great insights into Thai culture, traditions, and language. Working with us, you can rest assured that your Thai translation projects are in good hands with the best-in-class Thai localization experts. And the rates we offer are budget-saving, starting from $0.06/word. English to Thai Translation Services: Keystone for Your Success When Entering This Country 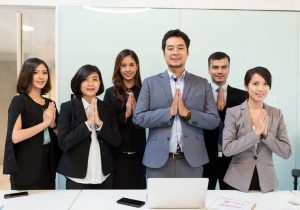 All You Need To Know About Thai Document Translation