As the Myanmar government is relaxing tourist entries and barriers in business, many foreign companies are taking this opportunity to invest in tourism and business in Myanmar. To successfully communicate with Burmese audiences or partners, the use of Burmese localization is the key.

The Burmese language has numerous politeness levels and honorifics that take the speaker’s status and age in relation to the audience into account. Therefore, using the right pronouns is of great importance, showing the speaker respect towards other people.

Polite pronouns are mostly used to address the elderly, older people, bosses, teachers, or strangers. In such situations, they use feudal-era third-person pronouns instead of first and second-person pronouns.

One refers to oneself as ကျွန်တော် kya. nau [tɕənɔ̀] for men and ကျွန်မ kya. ma. [tɕəma̰] for women (meaning “your servant”) and refers to the addresses as မင်း min [mɪ̃́] (meaning “your highness”) or ခင်ဗျား khang bya: [kʰəmjá] (meaning “master, lord”). These terms have been so ingrained in the daily polite speech of Burmese people that they don’t consider the root meanings of them. For younger people or those of the same status, people may use ငါ nga [ŋà] (meaning “I/me”) and နင် nang [nɪ̃̀] (meaning “you”) or use third-person pronouns (more preferred).

So what does it have to do with your Burmese localization project? You may ask. The answer is, your choice of pronouns has a direct impact on the audience impression of you. You need to carefully consider your target audience profile as well as your content types. Such information will help your native linguists understand your demands and choose suitable pronouns that show the appropriate level of politeness and respect to provoke positive feelings from the audience.

Below are some basic personal pronouns in Burmese with their levels of speech for your reference:

Burmese is considered one of the hardest languages in the East. When Burmese localization, you notably to remember some rules. While the alphabet or grammar mostly doesn’t give translators a hard time, the punctuation of the Burmese language does. Even experienced translators are sometimes confused by it. 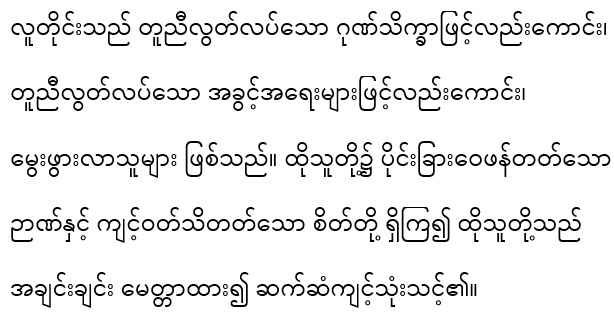 First, though Burmese is a tonal language, it doesn’t have special indicators for tones. Instead, it is implied through the use of vowels. Second, punctuation spaces in Burmese are not for words, but for separating phrases in a sentence. Third, Burmese doesn’t use the Roman alphabet punctuation marks like in English. It has a set of punctuation symbols as follows:

Technology has become an indispensable part of supporting linguists and engineers in the translation and localization process. Besides CAT Tools, DTP tools such as InDesign or AI are also used to help produce eye-catching and well-laid-out content. However, there is one problem that Burmese linguists encounter regularly when using such software to handle Burmese localization projects. It is the incompatibility of Burmese fonts among different software.

Though there are many Burmese fonts, the two most used fonts are Zawgyi-One font and Pyidaungsu font:

If you only need to either localize content or layout it, then there are no troubles. However, if you need both services, there can be some inconvenience. Translated texts in Trados will be corrupted when importing into InDesign.

Having a professional engineer to solve the font conflict is highly recommended. If you use professional Burmese translation services from a trusted language agency or linguist team, their engineer team can help you solve this problem. Some use World Composer to typeset text in Zawagyi font and implement that into the design files.

Cherry informed us that a lot of people intentionally write the wrong spelling of many Burmese words on social media, with the aim of making these words shorter and quicker to type. Unfortunately, as they get used to the wrong spelling, they are sometimes confused and do not remember which are the correct spellings of these words.

For example, the pronoun “အဲဒါ” (that) is misspelt as “အဲတာ” or “အာ့” on social media. “It is like messing up our own language”, said Cherry.

When you need localizing content for social media, the use of misspelt words might be acceptable. However, in the case of more formal documents, please avoid the usages on social media and have your content checked carefully by professional native linguists.

We hope the insights in this article will help you find great success in the Burmese market. If you are planning on the Burmese localization of your business into other Asian languages, download our free whitepaper for more localization tips into 10 major languages in Asia.