If you are thinking about translating your English content to get closer to Japanese-speaking audiences, here are some useful tips for English to Japanese translation you should consider.

#1. Know the Differences Between Japanese and English Writing Systems

The complicated writing system of Japanese is one of the reasons that make English to Japanese translation more challenging to handle. While English uses only one Latin-script alphabet that contains 26 letters, the Japanese alphabet includes three different writing systems.

Kanji (the adopted logographic Chinese letters), Hiragana, and Katakana – two phonetic alphabets – are all used in modern Japanese writing. Hiragana and Katakana both contain 46 characters, but Kanji has roughly 2,000. The usage of three writing scripts in Japanese leads to a large number of words that may be written in several ways and are utilized in various circumstances.

For example, one simple word “Egg” can be translated in numerous ways in Japanese:

The Katakana version is usually seen on egg price labels in supermarkets, but the Hiragana or Kanji versions are likely to be found in documents and publications.

For English to Japanese translation, it is essential to consult a native Japanese linguist to determine the most suitable writing styles that are appropriate for your target audiences and content.

#2. Be Careful When Using Japanese Honorifics

Another issue that makes English to Japanese translation difficult is the variety of Japanese honorifics. In a Japanese conversation, honorific suffixes are used to refer to other individuals. Suffixes (Keigo) are used at the end of people’s names to indicate the formality degree.

Here are some commonly used honorifics in Japanese:

Japanese honorifics are used to demonstrate the speaker’s regard for others. Both failing to use honorifics and utilizing the incorrect ones are considered disrespectful and insulting. To make a positive impression on your target audiences, you should carefully use honorifics when translating content from English to Japanese.

The degree of formality you should employ is often determined by the type of content, buyer persona, and other factors. For the best choice of honorifics, you should discuss with a native linguist or reliable Japanese translation service provider that is well-versed in the Japanese language and culture.

Aside from honorific complexity, Japanese has numerous differences from English when it comes to syntactic.

For example, there are no definite or indefinite articles in the Japanese language. Verbs in Japanese occur at the end of a sentence while the subject is not always required for a full sentence. In addition, plural nouns and future tenses are lacking.

Japanese structural particles are something you should also pay attention to. They replace prepositions and aid verb meaning.

To avoid grammar mistakes during the English to the Japanese translation process, make sure that you work with experienced and native Japanese who specialise in your domain.

Another thing you should mention to your Japanese translator is the list of translation tools you wish them to use. These tools include CAT tools, proofreading tools, QA tools, etc. For example, there are numerous choices of CAT tools for you (SDL Trados, MemoQ, XTM, and StarTransit to name a few). You should let your translators know which CAT tool you prefer them to use in this instruction kit.

Japanese people presently employ both horizontal and vertical writing orientations. Vertical writing is more common in traditional materials, historical literature, novels, and other humanistic works, whereas horizontal writing is more modern and is used in most business papers, scientific writings, and other types of writing. When Japanese people need to make the most of the space in newspapers or magazines, both orientations are sometimes combined.

When it comes to screen-based media, horizontal typography in Japanese is the popular choice. It is utilized for movie subtitles, internet, mobile phone screens, and so on.

With the suggestions above, we hope you are able to select an appropriate typeface based on the purpose of your material and where it will be published. Don’t forget to indicate the text orientation you wish to use in your English to Japanese translation style guide for translators.

The direction of your Japanese writing will influence the design of your documents. Because, unlike horizontal text, the binding for vertical text is on the right side and the pages proceed to the left.

Being a well-recognized global translation agency, GTE Localize brings you high-quality and comprehensive Japanese translation services from 100% experienced and native Japanese translators. We support all major Japanese language pairs and numerous industries that include life science, software, IT, business, legal, manufacturing, and education.

Contact our team for a free 1:1 consultancy now and get your English to Japanese translation started! 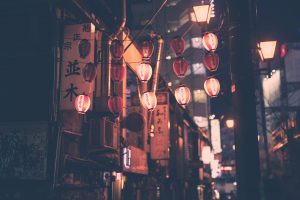